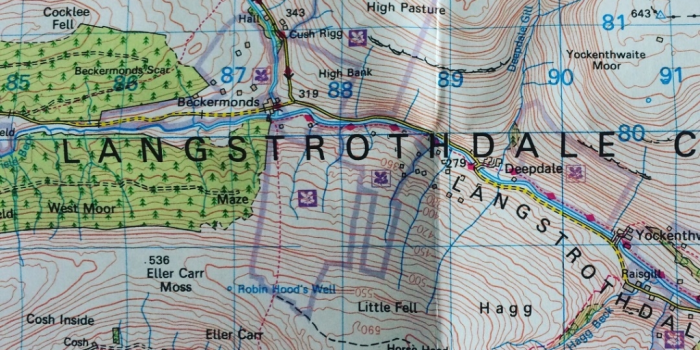 Follow the river Wharfe up from Cawood where it joins the Ouse; up through Tadcaster, westward through Otley, Ilkley, and the Strid; past Bolton and northwards well into the Dales proper. Now go further, through the rolling patchwork of Grassington; still deeper following its sinuous flow through Kettlewell, to where the river fancies itself young again in Langstrothdale. Here the river is parented at Beckermonds, a name which means meeting of the becks, of Oughtershaw and Green Field. At their confluence the river is born. A mile or so from the river’s source and up the dale’s southern fell you come to the old farmstead, Cowside. This is where we have holed up for the week, vacating the humdrum of our workaday lives in this stone-built, homely and eminently practical farmhouse, steeped in its own agricultural biography, which survives in its name; in the ‘poultiggery’ which still stands beside the farmhouse (though empty now of poultry and pigs); and in its wholesome painted plaster epigrams: Better is a dinner of herbs where love is than a stalled ox and hatred therewith. This is wisdom that still holds true even in the fast-paced and all-encompassing world of technology from which we are escaping.

The steading is embraced on its northern, southern and eastern sides by tall sycamores – now edited of their summer green – which form a natural windbreaker. We’ve watched throughout the morning as the wind has raised itself with louder and louder moans, whipping up wild wintry weather and sending it down the dale with mischief and bluster. It is with some surprise, then, that we find ourselves setting out for a walk. Harsh and inhospitable, the weather is throwing everything it has against the notion of mere walking for pleasure. But there’s a wildness in the fugitive holidaying self that answers in the future affirmative: I shall go. And so – gloved, hatted, zipped and well-wrapped – my companions and I make a party of three somewhat naively turned loose onto the fell.

Of a sudden I feel an ooof! to the chest as the wind steals my breath. They say that if you fall into icy water your lungs contract and you go into near-instant ‘cold shock response’. Never having had this misfortune, I can’t be sure, but this feels a little like that with the easterly wind barrelling into us full tilt. The wuthering gets into you, reaching icy fingers into the bones and lungs and meddling with your wits. Eyes streaming and breath steaming, I look down at the raw, hard beauty of the dale, whitened with cobwebbing frost. A few stunted and wiry hawthorns are wind-martyrs, bent-backed and crookedly veining the sky in inky friezes. A cry and a circling overhead is perhaps a kite lilting on the wind, seeming to defeat gravity and motion all at once. So cold is the hard smack of wind to the forehead that the very thought of the keen-eyed predator freezes in the mind and when I look again it is gone. The gale resists our every step down the fell towards the river and, stubbornly, we dig our heels deeper. 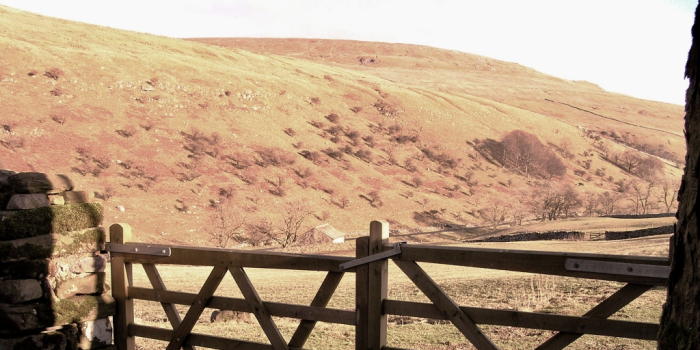 Slowly my mind unseizes and I can appreciate the frozen world around me. Though it is afternoon, the ground remains bound in frost, the branches of sparse trees furred into mystery with it, and the grass and leaves underfoot stiff and crackling to the boot. Puddles shatter like hardened sugar as we go. We cross the sluggish river spilling over its pitted stones where mallards have fastidiously abandoned the icy flow to stand on the limestone like fair-weather bathers. Cowlicks of moss cleaving to the stones are washed greener, their vibrant colour courtesy of the clean fell air. Strange to think of a stretch of county being united by this thin ribbon of river and for a moment I feel a kinship with others who will marvel at it as it tumbles over fosses, under bridges and through towns. 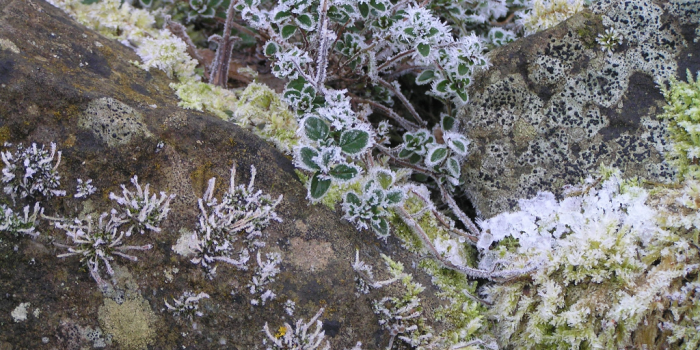 Our steps take us along the old packhorse route – the valley’s spine – that used to connect Lancaster with Newcastle. We are overlooked by the scarred fell sides, gouged by countless winter snowfalls that melt into action every spring. Still there’s the bite of the wind. Bodies battered, we begin to assume postures of apology for having dared to venture out on such a day, and are driven deep into ourselves even as we’re driven deeper into the valley for any sort of shelter. But the days of the medieval Forest of Langstroth, one of several royal hunting grounds, are over – the trees having given way to open moorland. Stone wall enclosures for grazing are the valley’s spiny architecture, marching down improbably steep hillsides. I wonder at those who assembled them at such unlikely gradients; whose hands were bloodied and callused by them.

Alone in the valley, we do not see another person as we go. The black-headed sheep grazing the lower pastures give us uncanny stares from eyes fathoms deep, following us with gazes that seem to say it is their land and we ofcumden are tolerated under sufferance. Walkers come and go with their temporary tracks, but the sheep leave lasting impressions. They are the masters of this landscape, each one shaping it by habit, cutting terrace paths into the fell-side. 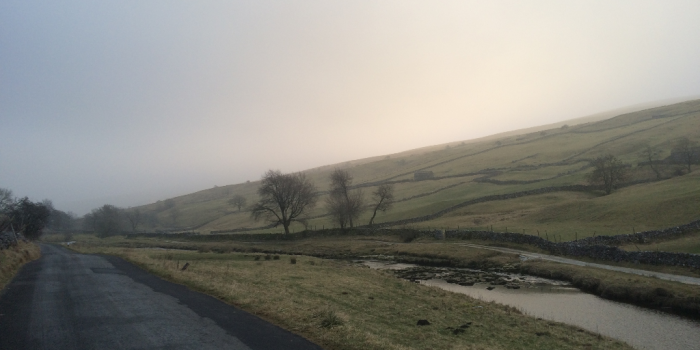 The walk is, of necessity, shorter than we would like, our toes and noses urging us home to hearth, hot chocolate and warmth. We look out for the landmarks that signpost our way back: the bent tree bussing the wall with its branches; the two bridges; that farm ascending the northern fell. Now that we have relinquished our ambitions to walk further, the wind is a help-mate, tidying us homeward. Seeing the smoke from our chimney, we’re a collection of smiles. I think of the farmer returning, more respectably than we, from a hard day’s work up the fell in days gone by and how much more he must have welcomed this sight. The sky is milky, flushed with rose and lavender hues into soft opalescence, but even as it darkens to mauve in the east and a few stars peep, I think of the farmer’s family, their hardiness, and their dinner of herbs.

6 thoughts on “A Dinner of Herbs”

“It is afternoon, which in winter is evening. The sward of the down is dry under foot, but hard, and does not lift the instep with the springy feel of summer. The sky is gone, it is not clouded, it is swathed in gloom. Upwards the still air thickens, and there is no arch or vault of heaven. Formless and vague, it seems some vast shadow descending.”

Richard Jefferies, Haunts of the Lapwing, 1883

"It's a dangerous business, Frodo, going out your door. You step onto the road, and if you don't keep your feet, there's no knowing where you might be swept off to." (J.R.R. Tolkien, The Lord of the Rings)

"And what a dynamic, handsome object is a path! How precise the familiar hill paths remain for our muscular consciousness... When I relive dynamically the road that 'cimbed' the hill, I am quite sure that the road itself had muscles, or rather, counter-muscles." (Gaston Bachelard, The Poetics of Space)