A sky like bleached bone, the leaves of the horse chestnut trees blushing and burning against it, leaching their tizer colours into the dampening air. In their crinoline cages of colour they’ve caught the sun, and the edges of their leafy fingers scorch, curl and turn to butterscotch and rust like bright corroding nails. The trees are discarding their leaves as though trying to put out the fire, but the autumn sun has worked on them until the whole crown makes a pyre in spite of itself and all those flaming hands are held up in surrender, smouldering and sizzling in the mist. I am glad I waited for this: a spectacle of colour that fizzes, pops and licks the autumn air.

Some weeks ago now it had been in the back of my mind to visit Higher Coach Road – a dirt track really, one of those small signs that suggests you’re escaping the urban and heading for the country – which hyphenates two of my more habitual walks in Saltaire. The road was never intended to be an end in itself, but these days you could be forgiven for thinking of it as a road to nowhere, unremarkable but for its tall cathedralling horse chestnuts trees. Arcades of holly and hawthorn hedges underneath complete the church. In the springtime, the chestnuts had been very fine with their candles of scented blossom and leaves that particular naive shock of green, and I knew then that in autumn they would be glorious again. They have been readying for their second showing, forced to it by cooler weather and the pell-mell October gales. I’ve been judiciously monitoring other trees, waiting for the sweet spot between enough autumn colour remaining on the trees and too many leaves having already given up their ghosts. Today, I judged the time to have come.

So down the hill, over the canal where workers are pondering how to mend the lock gates, past the overgrown shells of former nurseries – and hello Mrs Wren, flick-tailed in the brambles by the way – through the spinney, over the bridge and up by the rill. Standing fox tails of sheep’s sorrel punctuate the field to the left as I bend my steps upwards. An eager school party, clipboarded, heavily marshalled, and somewhat bemused at being out of doors, prompts me to turn early up the track to where it comes out on Higher Coach Road. The lane’s a furnace of colour: I am folding friable origami in red, orange and yellow below my feet. And yes. The horse chestnut trees are indeed glorious in their autumn flutter, their leaves the stained glass hung upon the cathedral trees. I’m a little smug – shamefully so – at how well I have timed my visit. The wash of leaves on the ground reflects those still on the trees and there’s a beautiful, warm symmetry to the ochre-ginger double glow. 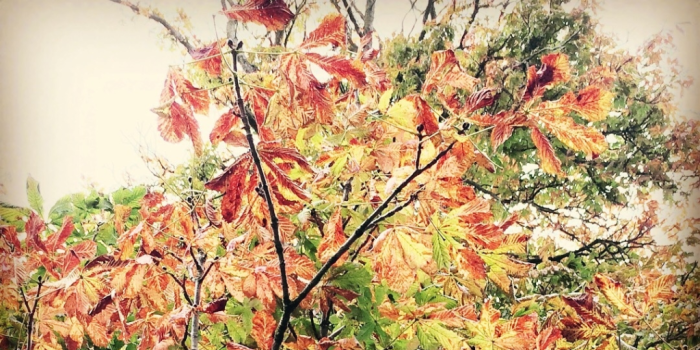 Someone’s dog noses at my feet, horse riders pass, and others I do not know wander down the road: we’re all witnesses to the confetti of colour, wondering together. Through the hedge break I expect to see the ebony and ivory of the cows in the field, but the farmer’s put them to pastures new today. I hear them lowing in the distance, not far away. The sharp slipstream of their scent remains, a rank tang on the air. I am wary of the thrumming clouds of flies that have been charmed here by the inducements of cow dung and damp, warm weather, unseen in their flitting pockets until I’m almost upon them and must dodge at the last minute. I’m only ten minutes from town but still I feel deep into countryside here. A flock of dozy Canada geese have set themselves up as temporary field tenants in the cows’ absence – a pitstop on their way to their wintering homes abroad – looking vulnerable with their heads tucked trustingly under wings to catch forty winks before taking off again. In the opposite field on the right of the lane, two herons sit imperiously and companionably until my eager step launches them skywards. I have read that the fat of a heron killed at the full moon was arcanely believed to be a cure for rheumatism and I wonder in a moment of whimsy whether the efficacy of the remedy came from ingesting the fat or through topical application. Thankfully, even should I suffer rheumatic agonies, I will never be tempted to either.

Higher Coach Road, as the name suggests, is an old carriageway and was the main approach road to the Milner Field Estate, commissioned by the eldest son of Victorian businessman and Alpaca wool factor, Titus Salt. Salt-Aire, you see; the village and Mill owe their existence to him. Having watched his father colonise this part of the Airedale valley for his great enterprise, Titus Salt Jr set about inaugurating a suitably grand home for himself and his family, siting it on the northern face of the valley overlooking the village: close enough to the Mill for the convenience of business but not so close that the family would be disturbed by the bustle of its comings and goings. I like to stand here and think of the ghosts of sprung carriages tooling down the lane, conveying their master and mistress home after a county dinner or soiree at one of the neighbour’s houses. The road is peculiarly rich in nostalgia and a heavy sense of its former significance lies on it as palpable as dust. It is rammed earth – though after rains, not quite so rammed, its loosened stones are the rocky bed for rivulets of rain water streaming down its length. Higher Coach Road as it is today is really only used by the farmer at Milner Fields, dog-walkers, and the residents of South Lodge. Embarassed out of its original importance, it is but a remnant of the former significance of the estate.

Rubble. Reclamation. A prick with a thorn. The past at slumber in a wood. Building the house at Milner Field in 1869 was a substantial undertaking. Its gothic, towered design was suitably grandiose, as befitted a family pre-eminent in West Yorkshire society. A prickly silhouette for a prickly place. Indeed, with its large glass conservatory, lush gardens and parkland, and over-sized marble fireplaces, it was deemed fit to entertain royalty twice, first in 1882, then again in 1887. 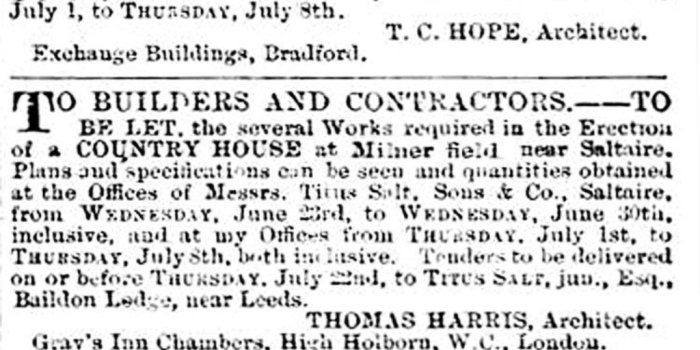 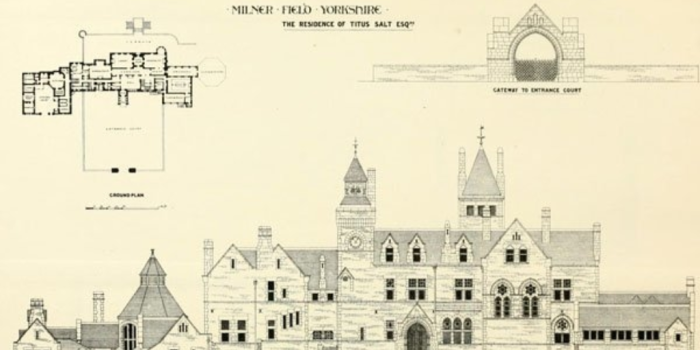 Though the estate’s South Lodge still stands at the end of the road, the great house of Milner Field has long since been razed to untidy rubble and masonry heaps due to its blighted history and no one wishing to live in it after the 1920s. A fey place; a cursed place; a tomb. Local superstition has, it seems, delighted in licking its lips and pronouncing the house haunted because of its attributed role in the tragic deaths first of Titus Salt Jr himself, and then of those children of the next owner of the house and Mill, Sir James Roberts. Heart attack. Illness. Drowning. The next owners after him, and then the next, suffered similarly precocious-seeming deaths, including Ernest Gates, who met with arguably the most curious death of all. His wife passed away from illness only months after they took up residence in the house in 1923, and two years later Ernest himself reputedly injured his foot on a rose bush in the garden of the house, contracted septicaemia and died. Skin broken by a thorn; a life is torn. Whether this is true or not, no such rose bush still survives in the now overgrown grounds – I know, I have looked. The last owners who moved into the house in 1925 were also both dead within three years. Being final proof of the house’s reputed malicious intent, and no one else wishing to live in such a “cursed” place, it was shut up thereafter and, having defied explosion by dynamite in the 1950s, was finally dismantled by demolition gangs in the 1960s. Local opinion generally found the whole business of Milner Field Estate to be a bad lot, and condemned the house as the villain of the piece.

If you look down the lane towards South Lodge today, you will see the pillared gates that marked the original estate entrance, now merely a gateway into a wood. Within this unremarkable-looking wood lie the remains of that once grand house, and today I have ambitions to go beyond the apparent end of the road to explore where the path takes me and see them. But I’m unsure of the access rights. The excellent Baildon Heritage Trail: Coach Road to Shipley Glen walking guide helpfully comments, in parentheses: “Please note that there is no public right of way through Milner Field Estate, but it is used extensively by the public.” A paradox of a path.

A stranger, dog in tow, exits the small gate at the end of the lane – little do I know it but she is the past walking towards me on the path. I fall into step with her to ask whether there is public access beyond the gate. There is a pause pregnant with the ambiguity of access permissions here before she answers. Assuring me that no one will challenge me if I venture through (not exactly what I was after), she goes on to say, more tantalisingly, you used to have to have a permit to pass beyond the gate. She worked at the Mill, she says, before it ceased being a working mill in the 1980s – and do I know the Mill? I can tell from the way her lips purse around the admission with a slight fond smile – as though savouring this rarefied connection to such a locally significant institution – that she is proud to have worked there. It makes her a bit of a walking legend in my eyes and I marvel at the serendipity of bumping into her on the lane. As she talks, we walk both in the past and the present, seeing everything in the present day through her memories. It is not clear why a permit used to be required to pass through the woods, but I suspect it had something to do with the state in which the land had been left (especially the exposed and treacherous cellars of the house) after the demolition gangs had done their work in the 1960s. We make our polite farewells, walk in opposite directions, and I approach the gate into the woods. As I step from Higher Coach Road into its sequel, I am conscious that I am walking down my stranger’s memory lane and at the same time forging my own. It is an odd sensation.

4 thoughts on “Memory Lane: Part One”

“It is afternoon, which in winter is evening. The sward of the down is dry under foot, but hard, and does not lift the instep with the springy feel of summer. The sky is gone, it is not clouded, it is swathed in gloom. Upwards the still air thickens, and there is no arch or vault of heaven. Formless and vague, it seems some vast shadow descending.”

Richard Jefferies, Haunts of the Lapwing, 1883

"It's a dangerous business, Frodo, going out your door. You step onto the road, and if you don't keep your feet, there's no knowing where you might be swept off to." (J.R.R. Tolkien, The Lord of the Rings)

"And what a dynamic, handsome object is a path! How precise the familiar hill paths remain for our muscular consciousness... When I relive dynamically the road that 'cimbed' the hill, I am quite sure that the road itself had muscles, or rather, counter-muscles." (Gaston Bachelard, The Poetics of Space)